So, here we are 4 years later and it seems Trump has indeed made good on his promise by renegotiating a deal, replacing the horrible NAFTA with a fantastic new agreement called USMCA. But for all it’s fanfare it doesn’t really seem like a very significant difference. USMCA is in fact a slightly edited revision of NAFTA. It should be called NAFTA 1.2. but I suppose that wouldn’t really serve the populist objective behind any mountainous molehill. The neon signs couldn’t be more blatant as all three nations put their own initials first in the acronym they recognize… Seriously, in Canada, the agreement is officially recognized as CUSMA and in Mexico, it’s called Tratado entre México, Estados Unidos y Canadá… T-MEC. At least THAT one can be pronounced – lol.

Already NAFTA seems much simpler, and this is just the damned name. .

Now for the actual differences, the victories of the dragon slayer, starting with the difference that isn’t. A history of lawsuits under NAFTA that seemed to favor the Canadians was driving a lot of the Trump assault on NAFTA. It was the source of all that talk about being defrauded and it was most likely the dragon that Trump’s sponsors wanted him to slay.

The name of this dragon is the “dispute process”, the part of NAFTA that has by far been the biggest complaint south of the Canadian border. So what did Trump do for us there?

Of course Trump himself won’t mention it but it’s clear that he lost that negotiation to Trudeau. The dispute process remains in place exactly as it was under NAFTA. So really, this isn’t a difference at all, but I mention it for the same reason all the other reports do, because more than any other aspect of NAFTA, that WAS the dragon to slay.

But still, a few differences were made. I may as well list them all because it’s not much…

Dairy: Canada has agreed to ease restrictions on it’s dairy market and allow American farmers to export about $560 million worth of dairy.
So, I dunno… I’m guessing this is good for our dairy farmers, right? Anyone else? Should we just wait and see if anything happens?

Automotive: Companies can now qualify for zero tariffs if 75% of their vehicles’ components are manufactured in the US, Canada or Mexico. Under NAFTA that figure was 62%
OK, so an existing regulation get’s increased by 7%, the Mexican factories get 7% more work and the U.S. consumers get dick.

But wait, Trump had another card up his sleeve…
30% of vehicle production must be done by workers earning an average production wage of at least $16/hr.

OK, I see the angle here. Not a bad idea. In fact it gives credence to the previous point as well. It’s curious because I’ve been advocating this strategy for a while, but the response I keep getting back is that old rant about a one world government. Seriously… every time. So I’m surprised to see this come out of the Trump team.

To explain… Trump has written a heavy-weight regulation that will force all the factories on the continent to flatten their pay, so everyone gets the same… in all three countries. [ALERT: MARXIST IDEA] Yes, I know, and maybe it’s a slippery slope to communism… but let’s suspend that for the moment so I can explain how this idea can work.

If you lay a regulation on one company and not the other. The later will gain competitive advantage. This is what can make a regulation unfair. But if you put it on both companies the competition stays level, or at least – unaffected. This is what this regulation will do for all of the business that can be captured by the other regulation that was just increased by 7%.

So, yes it’s a step closer to a world government and it’s a step toward Marxism, but fire is another dangerous place and yet it’s good sometimes to step toward a fire to get warm.

In any case, I’m going to give Trump a nod for this one… as one would give to a barnyard pig that miraculously cooked and served a chicken dinner.

As for me personally, I’m not sure what impact all this will have. The cars and the truck I have are made from parts that mostly come from North America as per NAFTA, including the Honda Civic that I am leasing, much of which was assembled in Mexico. I’m guessing my next lease will be affected by the higher cost of labor in Mexico, which I expect will drive the price up. 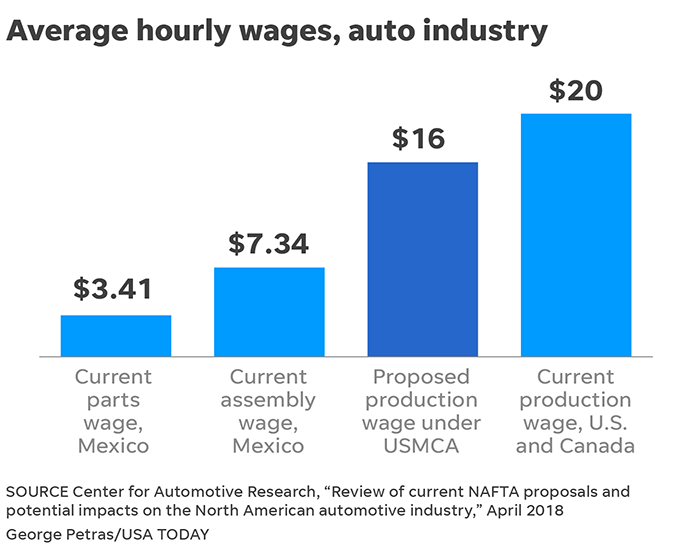 So by setting everyone to $16 the USMCA will increase the cost of assembly in Mexico by 54% and for parts the cost will increase by 78%. so yeah, from my personal position as an American consumer, it’s probably not such a good deal, but I feel worse for the American (and Canadian) auto-worker who will now be exposed to a potential 10% drop in wages. For them, I’d say, not a good deal at all. Zooming way out to the pontifications of Marx, sure – it seems Americans and Canadians are taking a glancing hit for the benefit of pulling the Mexicans out of the mud. The global-humanist perspective wins on this deal.

Even so… there is one other perspective I want to mention here… By pulling the Mexicans out of the mud we could be lessening their reasons for migrating to the U.S. which I personally think is a good approach to that particular issue, though in this case, I don’t think the difference will be all that significant since Mexicans working at Honda are probably not the ones making a run for the U.S. I dunno… one step at a time? More communism maybe?

I’ll let you draw your own conclusions.

The third and the ONLY other difference the USMCA makes is a deal on intellectual property… The regulation of ideas. So corporations that own patents can monopolize the market for longer, law enforcement officers in any of the three countries can stop “suspected” counterfeit (I’m not sure yet to what extent or if this infringes upon our 4th amendment rights as Americans) And of course there will be harsher punishments for pirated movies and satellite/cabel signal theft.

How does this affect me? I’m not sure yet. One thing I can say is that I’m approaching that age where I’m going to need medicine for whatever ailments are around the corner. I have always kept an eye on supply-chains outside the jurisdiction of U.S. commercial law because out there, you can get therapeutics at near cost. Typically an OTC therapeutic will cost 300% more in the U.S. because that’s the markup over the cost that we are forced to pay for. Now with the USMCA we can expect the market in Mexico and Canada to also be forced to pay homage to big-pharma or suffer. NOW where am I going to go to get my medicine without getting shafted for it?

Oh and before anyone gets into that “big-pharma needs to pay for innovation” argument – just… don’t. I’ve already been through the whole analysis on this. In fact, don’t listen to me – just have a look for yourself at the stock indices for big-parma… You will not find evidence of starving innovators. At the very least we can certainly say they don’t NEED more time than they already have to monopolize and gouge.

So these are the changes… the rest of the 300+ pages of agreements and regulations that make up NAFTA are left unscathed.

So let’s tally those changes up…

In summary it looks like Trump gave Americans a worse deal than NAFTA. But it’s probably not a big deal for Trump since his static 30% base probably won’t be paying any attention to the details like I just did and any such concerns such as mine can easily be out-gunned by a simple tweet from the king to his loyal subjects saying something like “I just slayed the dragon. hooray for me!” But I write anyway because there’s the other 60% that might actually be interested in reality.

This is an independent opinion site.

independent: not associated with any organization, company or campaign

opinion site:  NOT the news!